I’ve never driven a Hyundai before, in fact I’ve never driven a hybrid car. For those unfamiliar with hybrids, it’s a car that uses a combination of two or more motors. They come in different flavours. For instance, the 2017 Ioniq can be bought as a hybrid (which is the one I tested), a plug-in hybrid or full EV.  They all have their advantages but the hybrid option is the only model that doesn’t need to be physically plugged into an outlet to charge the battery. What they all have in common compared to a regular gas powered car is they have lower C02 emissions, which means less money on gas and a small contribution to a healthier environment. 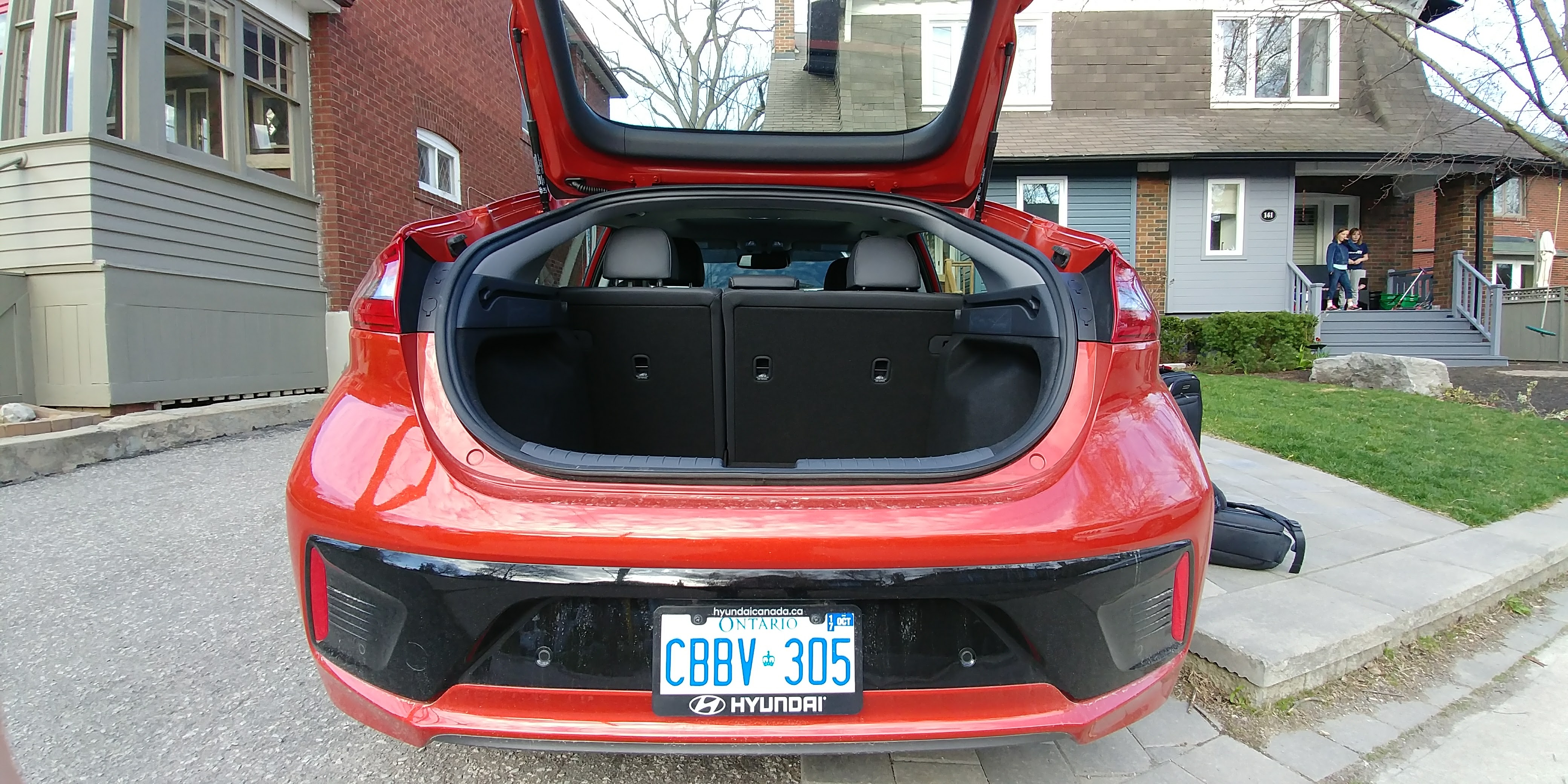 The Ioniq looks a lot like the Elantra, but with the difference of being a hatchback. I quite like the look. My loaner vehicle came in an orange or what Hyundai calls Phoenix Orange. It looks conservative on the back but sporty in the front. Blending two styles together nicely. 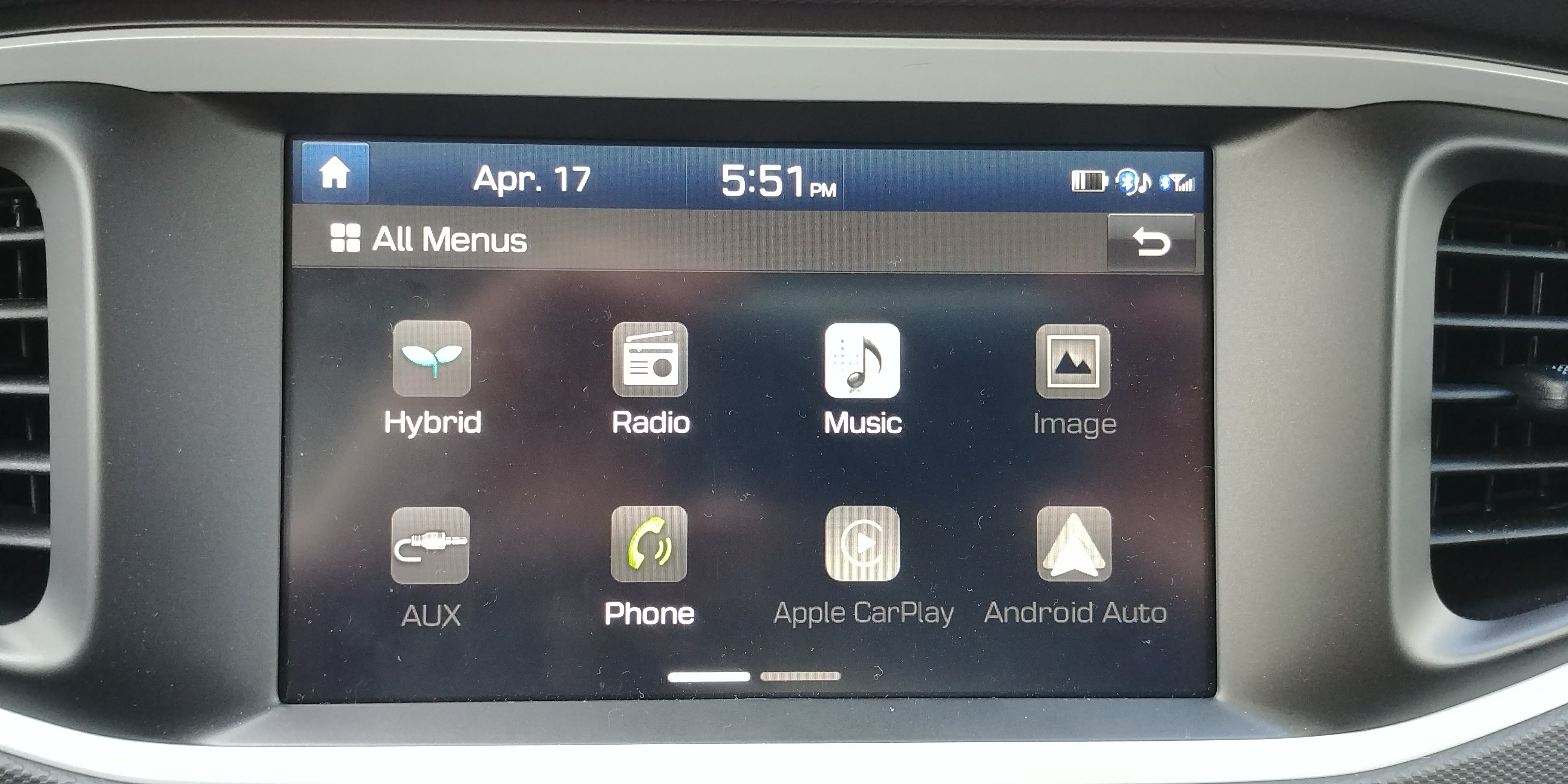 Inside I was greeted with a leather interior with lots of space for the driver to sit and a power tilt steering wheel and slide sunroof. Everything was visible and clear but what stood out right away was the 8” in colour touchscreen. Being a tech reviewer it was the first thing my fingers went for. Navigating the menus was quite simple and I didn’t feel their software was too complex. You can hook up your phone through Bluetooth to answer and take calls or stream music. I was excited to see Android Auto and Apple’s Car Play as options. Speaking of phones, the Ioniq has a Qi wireless charging pad that’s the perfect size to rest and charge your smartphone. Assuming your phone supports wireless charging. I thought it was a nice touch and a good way to keep your battery topped up, especially if you’re streaming music. 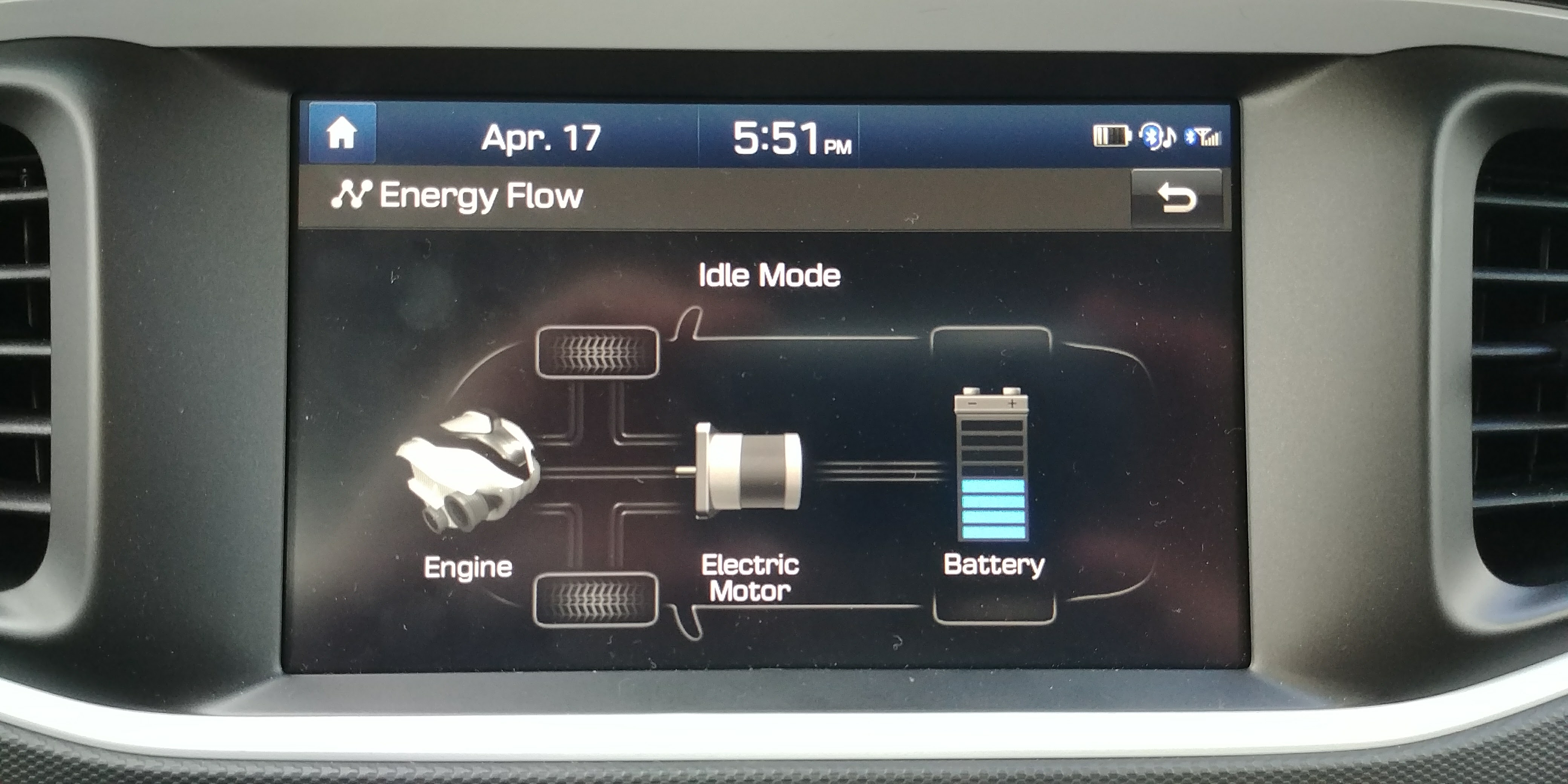 However, my favourite visual was the Energy flow diagram which shows the battery being charged while you drive. Every time you press the brakes or take your foot off the gas the battery charges. I thought it was a neat way to show the driver how the electric motor works to charge the battery. 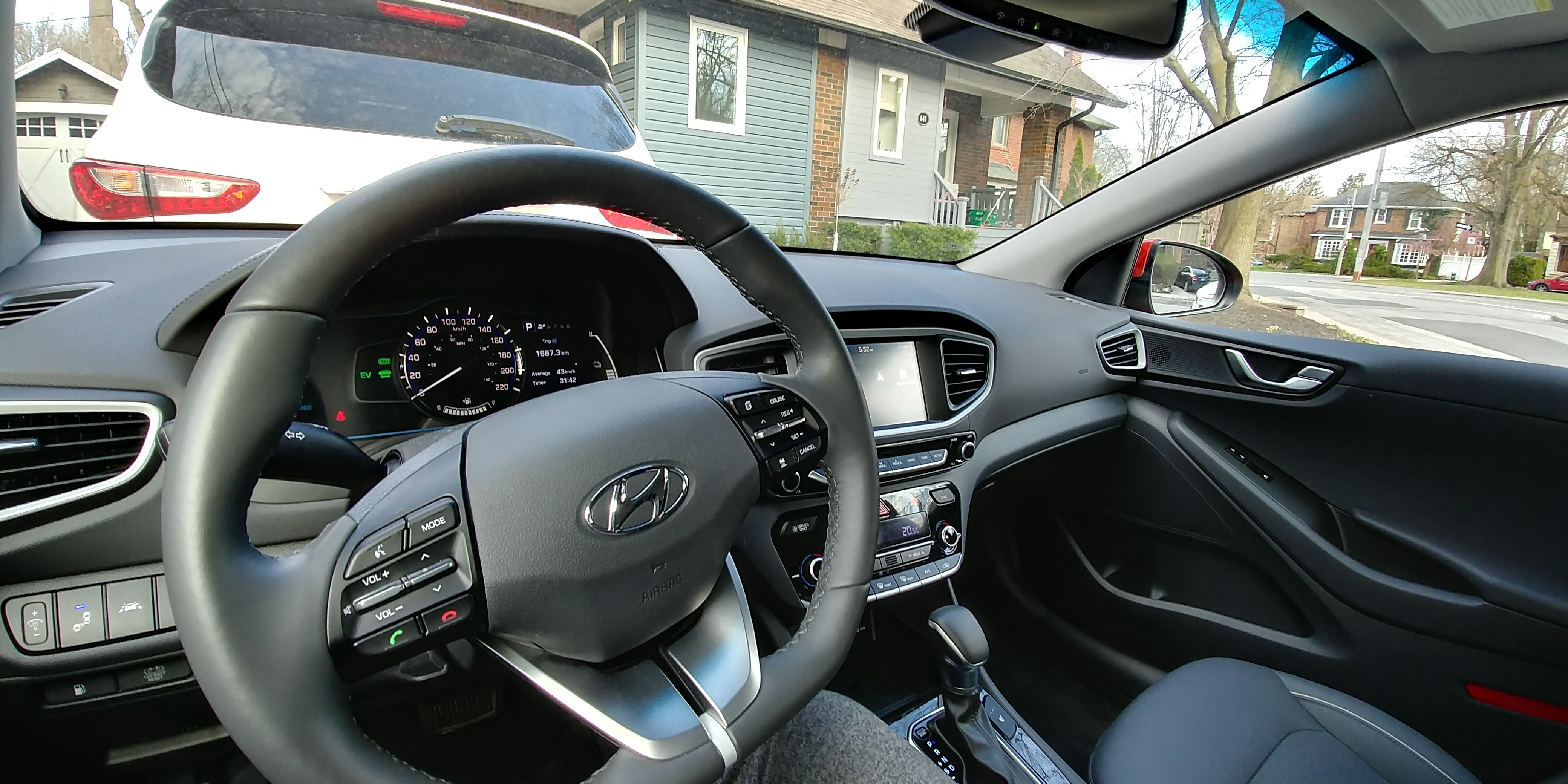 The rest of the interior is neatly laid out and my model came with all the bells and whistles like a heated steering wheel, front and rear seats. All the buttons to answer and make calls are conveniently located on your steering wheel, including pre-sets and volume. The back of the car has enough space to fit three people comfortably and the trunk has plenty of space to store cargo.

Like I mentioned before, I’ve never driven a hybrid before so the first time I started the car, I was taken back by how quiet the process was. It uses the electric motor to start which is significantly quieter than its gas counterpart. It wasn’t until I accelerated and hit about 10-20km/hour did the gas engine kick in. The transition from the electric to gas motor was seamless with no jerk motions.

The drive was very smooth, much smoother than my 2009 BMW 328. The steering was light and the car was easy to control. Braking was solid with good resistance. I didn’t feel like I had to slam on the brakes to come to a complete stop. 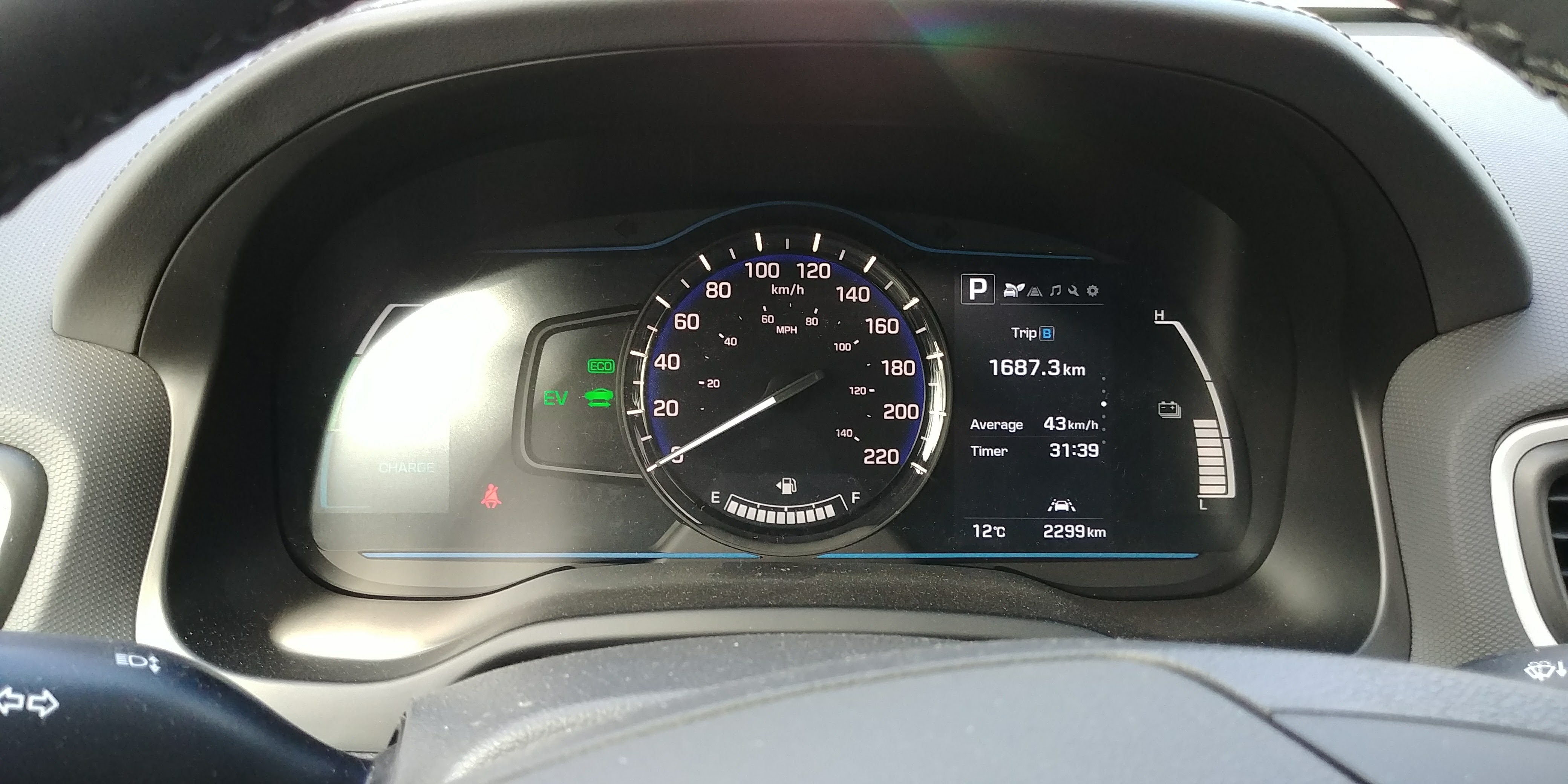 Most of my driving was done in the city of Toronto, but I did drive on the highway too. There are different modes you can choose from but I mostly kept it on Eco in order to conserve as much gas as possible. There’s a Sport and Manual mode as well, but putting it in Sport defeats the whole purpose of buying a hybrid. Needless to say, Eco mode did a fantastic job and it was amazing to see my fuel gauge only drop one bar after three days of using the car. Based on my driving habits, I’d probably only have to refuel once every month, if not less.

Hyundai also has a bunch of great safety features built into the car. For one, if you veer out of your lane the car will notify you with a beeping noise. This is great for people who drive long distances. It could potentially save lives in a situation where the driver starts to fall asleep behind the wheel. Secondly, the rear-view camera is great for parking. After using one for so long, you come to depend on it. It’s much easier to reverse the car and not hit something as opposed to using your side-mirrors as your guide. Finally, Autonomous Emergency Braking with Pedestrian Detection. This is another lifesaving feature. Inside the rear-view mirror is a camera and along the front bumper is a radar sensor. These two items work in unison to detect a slow or stopped vehicle and/or pedestrian in the front and warn the driver of a potential collision. The great thing is if the driver doesn’t react in time the system will apply emergency braking. 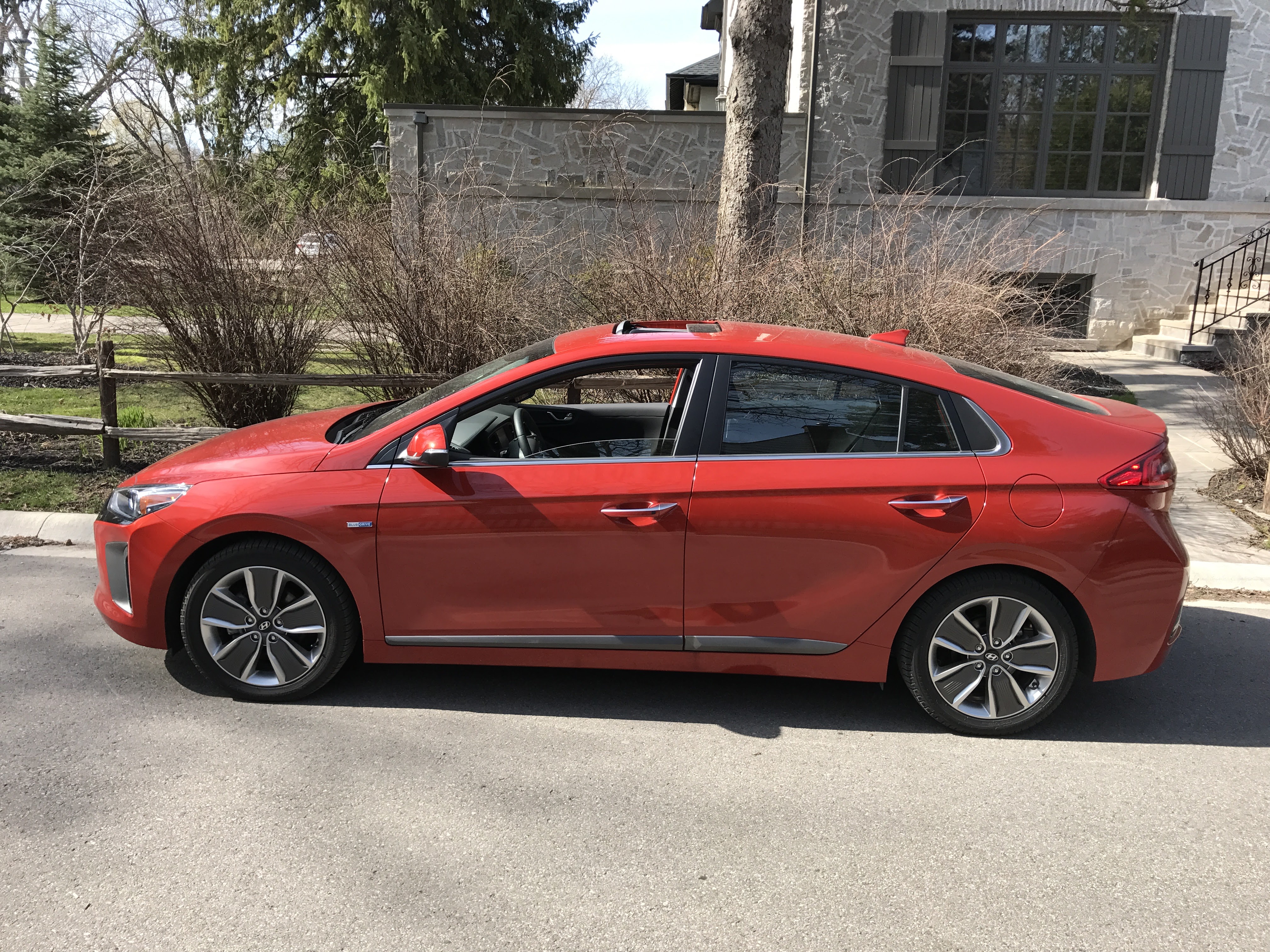 Overall, the Ioniq exceeded my expectations. It had a smooth drive, great interior, plenty of cargo space, tons of safety features and the right amount of smart technology. Driving for one week and only seeing my fuel consumption drop slightly was a huge surprise. It made me realize that driving a hybrid can feel exactly the same as driving a regular car but with the added benefit of improved fuel economy. I’m not up for a new car today but when I am you can bet Hyundai will be on my list.